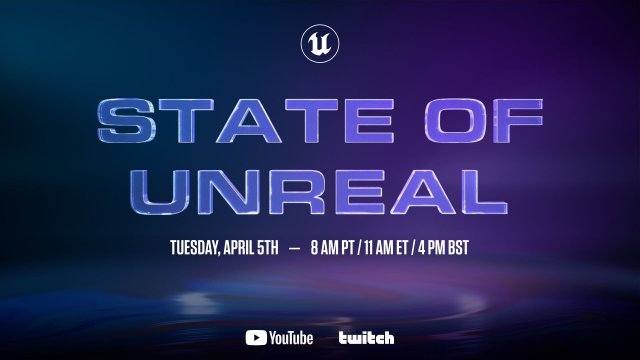 There should be some big news about Unreal Engine 5 next week. At least that’s what previous suggestions from Epic Games suggest.

State of Unreal: This shows Epic

The developer of Unreal Engine 5 and Fortnite announces the return of “State of Unreal”. On Tuesday, April 5, starting at 5:00 p.m., there will be a live stream on YouTube, among other places, which Epic says is about the “future of gaming.” “Exciting news”, a “very special announcement”, and “illuminating technical presentations” are also expected. You will find the YouTube premiere as an insert in this news, you can conveniently start the live stream here.

It is not yet known what exactly Epic reveals in the keynote, which alone should last a good 90 minutes. However, it is to be expected that the completion of Unreal Engine 5 will be announced. At the end of May 2021, Epic made early access of the new version of the engine available to interested users for the first time. Since then, there have always been impressive demos from outsiders, and ultimately Epic’s Fortnite UE5 beta, and of course not forgetting The Matrix Awakens’ extremely impressive UE5 demo. At the end of February, the completion of UE5 Preview 1 was announced. CDPR also announced that it would switch to Unreal Engine 5 for future projects, such as a new The Witcher.

Spring 2022 was already mentioned last year as the release date for the “full version” of Unreal Engine 5. The early April date would be perfect for a timely announcement that UE5 is ready. After the keynote, which will include Epic CEO Tim Sweeney and CTO Kim Libreri, there will be two more talks on The Matrix Awakens (perhaps with a PC release too?) and one on how to be the first game of Unreal Engine created. We will keep you informed about the announcements.