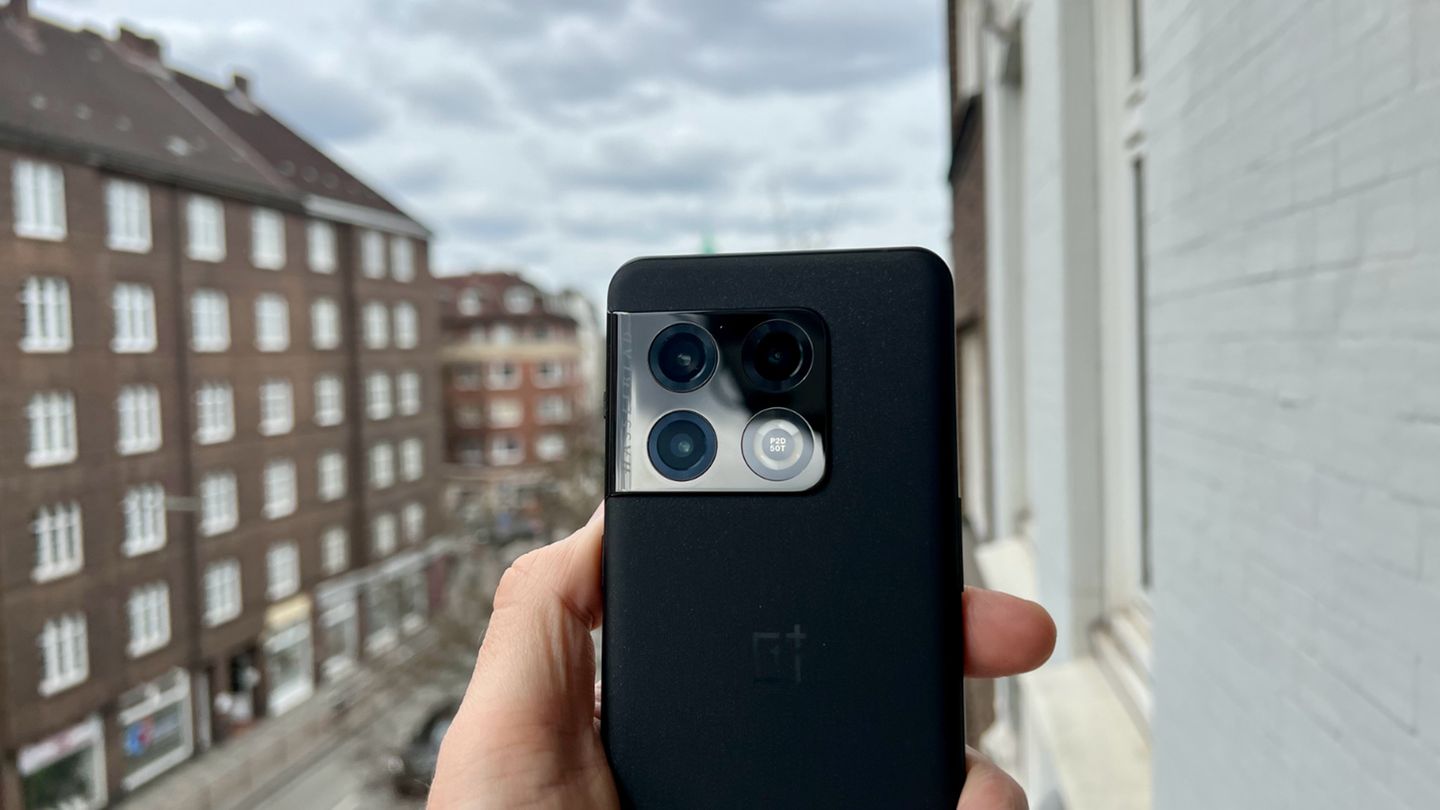 The Oneplus smartphone brand represented big visions for a small budget. The new Oneplus 10 Pro is the complete opposite. And only the Edelknipse stops him.

How to make a new brand big in the market? Small startup Oneplus set itself this challenge early on. The answer: a lot of enthusiasm for a technically sound smartphone for little money. The biggest weakness, however, was always the camera. With a cooperation with Hasselblad, Oneplus wanted to become a manufacturer of premium smartphones. But the distance from one’s own roots takes revenge.

That starts with the outside. The first Oneplus smartphone, called simply “One”, got some idiosyncratic design decisions. Instead of relying on modern metal backings like the competitors, it offered a pleasing and unusually slip-resistant alternative with a backing reminiscent of sandstone. After Oneplus quickly moved away from it and relied on metal first and then glass, sandstone is now back. The black model is visually and tactilely reminiscent of the ancestors. Unfortunately, the handle is missing: Oneplus somehow managed to make the rough surface feel even more slippery than glass. A somewhat strange development.

Unfortunately, the Oneplus 10 Pro’s camera bump, which is impressively integrated into the frame, is highly susceptible to dust and fingerprints. Good to see here: the sandstone back and the mute switch

The second eye-catcher on the back is, as on other smartphones of this generation, the gigantic camera bump, which includes the not-so-inconspicuous “Hasselblad” lettering. As with the predecessor (here in our test), the cult camera brand Oneplus has once again supported the development, the supposedly precious snapshots being one of the main selling points. In fact, the two companies are reticent about the details of the cooperation, the camera expert probably mainly helped with the adjustment of the software.

In practice, as with the Oneplus 9 Pro, the cooperation is less than one might expect. It can be found most notably in the red release button and the Hasselblad sound, and the professional mode also bears the Hasselblad logo. Images in daylight are very nice to look at, but in low light the images lose a lot of detail. Oneplus has always had a weakness here, it would have been nice if it was finally fixed. You can find a detailed comparison of the cameras in the photo gallery.

Oneplus 10 Pro in photo comparison: What are Hasselblad snapshots really for?

The Oneplus 10 Pro cuts a good figure in the videos. By default it is recorded in 1080P, but if you want you can also set more modern resolutions such as 4K (with up to 120 frames per second) or even 8K. However, this must be taken into account carefully: the device gets very hot with 8K recordings and the battery drains noticeably. 30 minutes of video consumed about 15 percent of battery power in the test. In addition, videos consume a lot of memory, almost 500 megabytes per minute are consumed. If you don’t have an 8K TV at home, you can save storage space.

You can’t enjoy them in all their glory on the Oneplus 10 Pro’s screen, either. At 1440 x 3216 pixels, it doesn’t offer 8K resolution, but that would be completely oversized on the 6.7-inch AMOLED display. The screen is extremely sharp and displays colors and deep blacks well. The flexible refresh rate is also nice: depending on the displayed content, the screen can freely adjust its refresh rate between 1 and 120 frames per second. This ensures scrolling is very smooth without draining your battery. It works quite well in daily use, the change is not noticeable.

The low brightness is a bit embarrassing. According to the manufacturer, the Oneplus 10 Pro reaches a maximum brightness of 1,300 nits, but in daylight it still looks quite dark compared to an iPhone 13 Pro, even on the highest auto level. This is where the software should help. But you shouldn’t expect that: the system already warns that battery life will be affected if the screen is turned on to the maximum.

Actually, it shouldn’t fail. At 5,000 mAh, the Oneplus 10 Pro is extremely well equipped. In the test, the device always lasted a full day even when used heavily and even had reserves left. More moderate users should regularly get a second day. However, in view of fast charging, a low battery level is not the end of the world. Thanks to Oneplus’s powerful fast-charging technology, the 10 Pro can be recharged from 0 to 100 in just under half an hour with the right charger.

The rest of the hardware is at a high level, but in the end it’s not a quantum leap. The processor is the speedy Snapdragon 8 Gen 1, which comes with either 8 or 12GB of RAM depending on memory selection. The Oneplus 10 Pro is always on the go, even high-end games and videos handle it without getting out of breath. However, this applies to most premium smartphones.

As a unique selling point, the little details that Oneplus has kept from its early days are more fitting. There is, for example, the mute switch, which is otherwise only given by Apple to its smartphones. It has been an integral part of the program since the first Oneplus smartphone. Once you get used to the three levels (loud and vibrating alarm, completely silent), you won’t want to do without the controller anymore.

Oneplus also continues to cook its own soup with the software. At least in Europe: if the Oneplus 10 Pro comes with Oppo’s ColorOS Android system in its home country of China, Oneplus offers its own system with OxygenOS in the rest of the world. This offers some cool features like the widget screen which can be accessed by swiping on the top right corner.

Unfortunately, there are also some weird decisions: Automatic content rotation when the device is tilted is off by default. Clips shot in landscape format are always displayed with thick bars in the Photos app. Fortunately, this can be quickly changed in the menu. On the other hand, Oneplus’s promise to support the device with three other major Android updates and guarantee four years of security updates is a good one.

Conclusion: the end of the hype

The Oneplus 10 Pro is many things, it is no longer exciting. Ironically, the much-hyped camera is more of a weakness than a strength. The hardware feels very well made, with the exception of the camera, which is a bit weak, the best technology is used. But the magic moment that used to set many Oneplus devices apart from the competition is simply missing. Except for little details like the rest slider, the Oneplus 10 Pro now feels like other fairly generic smartphones. The price has also been general for a long time at 899 euros and is not so cheap anymore. That makes compromises like the camera even more annoying.

The Oneplus 10 Pro is a good smartphone. But not anymore. Therefore, it is not a real purchase advice. If you want to save money, you can do it with the most expensive models from premium manufacturers, such as the iPhone 13 or Samsung’s Galaxy S22, which cost at least 100 euros less than the Oneplus 10 Pro. If you add a hundred more, you even get the Galaxy model Ultra or the iPhone 13 Pro.