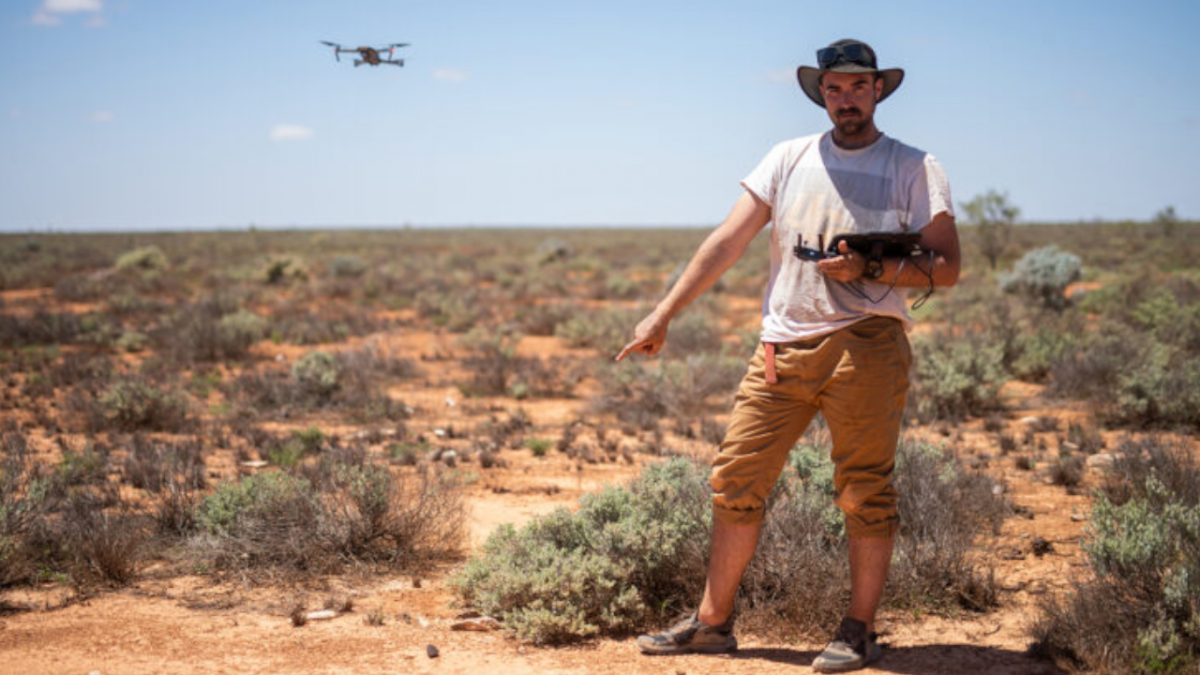 Meteorites are precious messengers from the depths of space. When a shooting star shines in the sky, sometimes a small piece remains and lands somewhere on earth. Then the researchers go in search of these cosmic stones.

They are assisted in their search by the Global Fireball Observatories (GFOs), which point their cameras skyward to detect meteors entering the atmosphere. In Australia, the Desert Fireball Network observing stations at the Center for Space Science and Technology at Curtin University are part of the global network.

On April 1, 2021, the Mundrabilla and O’Malley stations in eastern Australia observed a fireball that glowed brightly for 3.1 seconds. It became visible at an altitude of 87 kilometers at a speed of 25.4 kilometers per second. At 25 kilometers altitude, it was flying only at 8.4 kilometers per second and its trajectory was inclined 64 degrees. And it should weigh between 150 and 700 grams. However, it is difficult to calculate exactly where the meteorite must have struck from just two observation points, which are also about 150 and 470 kilometers from the supposed landing site. The evaluation of its trajectory showed that there was a 90 percent probability that it was located in a desert area of ​​5.1 square kilometers.

Who fans out for the search for meteorites?

The usual process after such a meteorite impact is for a team of volunteers to fan out and systematically comb the area to find the cosmic stone in the desert sands. With an area whose size is exactly between Bremen and Hamburg, this is an impossible undertaking. So researchers at Curtin University tested the system they developed, which is based on drones and an AI algorithm.

For the development, the researchers borrowed meteorites from the Western Australian Museum, placed them in desert sand and took pictures of them. Since meteorites develop a glassy fusion crust due to the intense heat that affects them when they enter the atmosphere, this distinguishes them from other stones. They used these images to train a neural network. According to the researchers, the biggest challenge was limiting false-positive results.

The meteorite impact on April 1 was the opportunity to test the new system. A research team traveled to the desert with two drones and the AI ​​on their field computer. First, the researchers had the large drone systematically fly over the area and film it. The DJI M300 drone with the Zenmuse P1 camera mounted took about three days to cover the entire study area. It flew according to a fixed grid with 20 percent overlap of the areas flown.

Confused with desert flower and kangaroos.

After each flight, the AI ​​evaluated the images taken, each image with a resolution of 1.8 millimeters per pixel. The algorithm divides the drone images into 125 x 125 pixel mosaics and then analyzes them. Two human teams resolved the obviously false-positive findings; for example, the AI ​​has a preference for the purple flowers of a desert flower and for kangaroos.

Then a second, smaller drone flew to all the results that were obviously not wrong. All the finds that still resembled the meteorite were directly observed by people on the team. After four days, the meteorite was found: it was one of the first identified by the large drone and the first found by a drone and an AI. It lay intact in the sand, weighing only 70 grams and lying just 50 meters from where the Desert Fireball Network’s computers had extrapolated. Instead of the usual 350, the researchers needed just 12 business days to search.